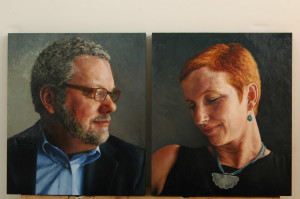 As Image celebrates its twentieth anniversary this year, we decided to ask Gregory and Suzanne M. Wolfe, the founders of the journal, a little bit about how it all began.

Image: Before we get to the matter of why you both founded Image, let me ask a different question. Who were you—as people—when you founded it? Paint a portrait of Greg and Suzanne Wolfe circa 1989.

GW: Let’s see. I was a twenty-nine year-old father of three. So you can see I was already ambitious in one sense. There is something wonderful and a little terrifying to me now about the energy and ambition of youth. I was in thrall to the notion of the literary life, consisting of journals and magazines and small presses that collectively constituted the “republic of letters.” I imagined there was something of a grand continuity from Samuel Johnson and his circle swilling ale at Ye Olde Cheshire Cheese down through Carlyle and Ruskin at theEdinburgh Review and on to T.S. Eliot’s New Criterion, the Partisan Review, and beyond. That was perhaps romantic and naïve, but it’s also what helped give us the motivation to found Image.

SMW: And of course part of the literary circle—indeed, perhaps the most important part—is the readers. We were also motivated by the desire to find a community of artists, writers, and readers who shared our passion for the relationship between culture and cultus, or things spiritual. I wanted to meet such people, preoccupied as I was with three children under the age of five and still pining for the intellectual stimulation of Oxford.

Image: Most of the journals you mentioned were intellectual or critical, but Image has done very little criticism. It has focused primarily on original creative work rather than discussion of it. Why did you choose to go that way?

GW: On a fairly obvious level we founded Image to show that great literature and art informed by or grappling with Judeo-Christian faith could still be made. That’s the standard rationale. But another key aspect of our approach was to push back against the near-total domination of the cultural airwaves by secondary discourse, which was (and still often is) highly politicized. An obvious example would be the extreme theorists who seem to make art subsidiary to criticism. In 1989, as now, the talking heads seem to get most of the airplay. We wanted what Coleridge called the “primary imagination” to be experienced again, free from the noise of intellectual chatter. We occasionally publish what we call “thought pieces”—meditations drawing on theology and aesthetics—and they remain important to us, but such essays are grounded in a respect for the creative act.

SMW: By going to the source—the artists themselves—we reaffirm that the imaginative act is a form of love working toward incarnation, that love is an action not a thought. That trumps reason every time, in my opinion. The American tendency towards abstraction is a gnostic tendency that only those in the faith and art communities can counteract. That’s why Image is a conscientious objector in the culture wars.

Image: Greg once jokingly likened Image to a high-maintenance mistress. But seriously, what has it been like to know that you two were the ones ultimately responsible for the survival of a nonprofit arts journal, with all the precariousness and uncertainty and incessant labor that brings along with it?

SMW: A mistress I could handle. Try this: Moses’ wife leading a recalcitrant camel through the desert saying, “Are we there yet?” Like most worthwhile and visionary things, the reality is far from glamorous.

GW: If you keep giving short answers people are going to think I do all the talking around here. Moses gets the credit but you know Zipporah held it all together. And no, it’s not glamorous. I tell the students we interview for internships that the Image office is less like a salon and more like the shipping department at Amazon.com. It has been, however, rewarding. Huge risks can sometimes bring huge rewards. So far, our rewards have been largely in the spiritual realm. Wait, you could handle a mistress?

Image: After twenty years, does it ever get stale or routine? Or is there something that keeps it fresh for you?

SMW: When I proofread each issue of Image I am overwhelmed every time by the brilliance, heartbreaking courage, and sheer beauty of the art, poetry, fiction and interviews. It amazes me that there are individuals in the world so full of longing for “the permanent things” and the ability to express that longing honestly and artfully. It’s humbling too. I’m not a regular attendee of the Glen Workshop because of family responsibilities, but the times I have gone I have felt the same sense of community and a reaching for beauty and meaning. As a writer myself, this makes me feel less alone and less…strange. Perhaps the most intense feeling I get when I read an issue of Image or attend the Glen or the Florence Seminar is that it is all much bigger than Greg and myself. There’s a kind of miracle at work here and it has nothing to do with us.

GW: I am sometimes asked by would-be contributors to the journal: “What are you looking for?” My answer is: “If I knew what I was looking for, you should shoot me.” What remains fresh is the art itself. If Image has demonstrated anything over the past two decades, it is that art that engages faith is as diverse as it is possible to be. The religious sense doesn’t have a house style. In short, I can still be surprised.

Image: What about the future? Is there anything you’re hoping the journal will accomplish or any changes you’d like to make?

GW: Well, the staff has just completed a six-year strategic plan that, if implemented, would make a good thing even better, I think. There is much we’d still like to do. For example, we’d like to add pages to each issue to make more room for reviews of books, art exhibitions, musical performances, and so on. We’d love to have the resources to commission more essays on architecture, dance, classical music. One day we’d like to include a CD with every issue, containing more visual art, music, readings, etc. The strategic plan also calls for more scholarships to our events, more fellowship opportunities for young students and apprentice writers, and other program enhancements. Of course, we completed our strategic plan just as the economy tanked—but we’ve made it through twenty years, so even if we have to delay the launch of that plan, we believe its time will come. And the beauty of that plan is that, as Suzanne says, it’s the product of an entire community—a gifted, hard-working staff, an amazing board, the friends and advisors who surround us.

SMW: You forgot to mention Still Point, an artists’ colony and retreat center we’d like to found for artists and writers who need a quiet place in which to complete their work. This is a dream of ours and was, funnily enough, in the original, utopian master plan we drafted twenty years ago. Then we realized that a journal would be a better flagship for such a community andImage was born. I for one wouldn’t mind spending my retirement years running an artists’ retreat in New Mexico or the San Juan Islands. Perhaps if it ever comes into existence we should name it Still Here.