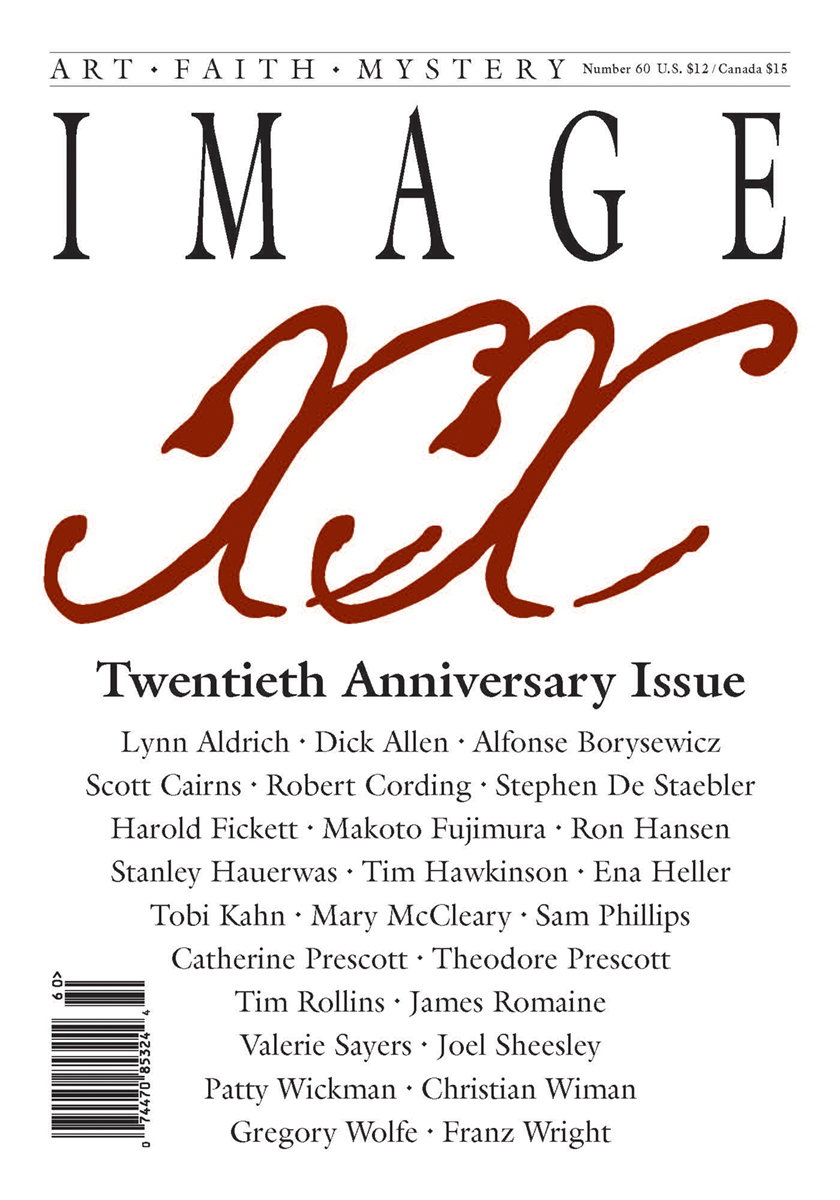 Our twentieth anniversary issue! In the symposium “Fully Human,” nine artists and writers consider how art enlarges our sense of human calling. Plus, a conversation with singer-songwriter Sam Phillips; an essay by Christian Wiman; poems by Franz Wright, Joanna Solfrian, Dick Allen, and Terri Witek; fiction by Ron Hansen; four painters discuss contemporary painting; and more. We had to add pages to this issue in order to pack all this goodness in.

Scott Cairns, Speculation: Along the Way
Nothing

Joanna Solfrian, The Priest Stops in the Churchyard
I Used to Light Candles for You

Anya Silver, The Burned Butterfly
The Name of God

William Coleman, According to Lazarus
Bystander

Dick Allen’s poetry collections include: The Day Before, winner of the Sheila Motion Poetry
Award; Ode to the Cold War; and Present Vanishing (all from Sarabande). His poems have recently
appeared in American Poetry Review, Cincinnati Review, North Dakota Quarterly, Atlantic
Monthly, North American Review, and Best American Spiritual Writing 2007. He has received
fellowships from the NEA and Ingram Merrill Poetry Foundations.

Scott Cairns is professor of English and director of creative writing at the University of Missouri.
His recent books include: Compass of Affection: Poems New & Selected (Paraclete), Short Trip to the
Edge: Where Earth Meets Heaven—A Pilgrimage (HarperOne), and Love’s Immensity: Mystics on the
Endless Life (Paraclete). He was also a contributor to God with Us: Rediscovering the Meaning of
Christmas (Paraclete). In 2006, he was awarded a Guggenheim Fellowship.

William Coleman has served as managing editor of Image and executive editor of nonfiction for
DoubleTake. A former teaching fellow at Harvard University, he teaches literature at Northfield
School of the Liberal Arts in Wichita, Kansas, where he lives with his wife and daughter. His
poems have been featured in Poetry, Paris Review, New Criterion, and other publications.

Ron Hansen’s most recent novel is Exiles (Farrar, Straus and Giroux), about the shipwreck of the
Deutschland and the Jesuit poet Gerard Manley Hopkins. He teaches literature, film, and creative
writing at Santa Clara University and serves as a permanent deacon for the Diocese of San Jose.

Richard Michelson’s most recent poetry collection is Battles and Lullabies (Illinois). He is the
recipient of the Felix Pollack Prize in Poetry and the New Letters Literary Award, and his poems
have appeared in New Letters, Poetry Northwest, and the Norton Introduction to Poetry. He also
writes books for children.

Dan Murphy is an elementary school teacher in Los Angeles. He won the Academy of American
Poets Prize in 2006. His work has recently appeared in Whiskey Island and is forthcoming in
Askew and on ForPoetry.com. The poems published here take their inspiration and titles from a
text entitled Medieval Miniatures by L.M.J. Delaissé.

Farrell O’Gorman is the author of a novel, Awaiting Orders (Idylls), and a critical study,Peculiar
Crossroads: Flannery O’Connor, Walker Percy, and Catholic Vision in Postwar Southern Fiction
(Louisiana State). His creative nonfiction has appeared in Shenandoah, Gettysburg Review, and Best
Catholic Writing 2007. He teaches in the Program in Catholic Studies at DePaul University.

Jeffrey Overstreet is the author of a “memoir of dangerous moviegoing” called Through a Screen
Darkly (Regal) and two fantasy novels, Auralia’s Colors and Cyndere’s Midnight (WaterBrook). He
is a contributing editor for Seattle Pacific University’s Response magazine, and he writes about art,
faith, and culture for ChristianityToday.com and his own website, LookingCloser.org.

Kelcey Parker’s fiction has appeared in Western Humanities Review, Indiana Review, Santa
Monica Review, Bellingham Review, and in the anthology Not Safe, but Good (Thomas
Nelson). She has a PhD from the University of Cincinnati and lives with her husband and
daughter in Northern Indiana, where she is an assistant professor of creative writing at Indiana
University South Bend.

Theodore L. Prescott is a Distinguished Professor of Art at Messiah College in Grantham,
Pennsylvania. He is a sculptor who often writes about art. The Phillips Museum of Franklin and
Marshall College will have an exhibition of his work in 2010, and he is working on research for an
exhibition he will curate about imagery mediated by substances, tentatively scheduled for 2012.

Anya (Krugovoy) Silver is the author of a book of poems, The Ninety-third Name of God
(forthcoming from Louisiana State), and Victorian Literature and the Anorexic Body(Cambridge).
She has recently published poetry in Crab Orchard Review, Many Mountains Moving, Cream City
Review, and the Louisville Review. She teaches in the English department at Mercer University.

Joanna Solfrian is a MacDowell fellow, and her work has appeared or is forthcoming in journals
such as Margie, Southern Review, Rattapallax, Pleiades, and Spoon River Poetry Review. She is
currently finishing her first collection of poems, entitled “Visible Heavens.” She lives in Brooklyn,
New York, where she works with teenagers.

Brian Volck is a pediatrician living in Cincinnati. He co-authored Reclaiming the Body: Christians
and the Faithful Use of Modern Medicine (Brazos) and is a recent graduate of Seattle Pacific
University’s MFA program in creative writing.

Christian Wiman is the author of three books, most recently Ambition and Survival: Becoming a
Poet (Copper Canyon). He is the editor of Poetry.

Terri Witek’s books include The Shipwreck Dress (Orchises), Carnal World (Storyline), Fools and
Crows (Orchises), and Robert Lowell and Life Studies: Revising the Self (Missouri). She teaches at
Stetson University where she holds the Art and Melissa Sullivan chair in creative writing.

Franz Wright received the Pulitzer Prize for poetry in 2004 for Walking to Martha’s Vineyard;
his most recent books of poetry are God’s Silence, Earlier Poems, and the forthcomingWheeling
Motel (all from Knopf). He is currently finishing a three-year appointment as poet-in-residence at
Brandeis.

Read our interview with Gregory and Suzanne Wolfe, only available online!