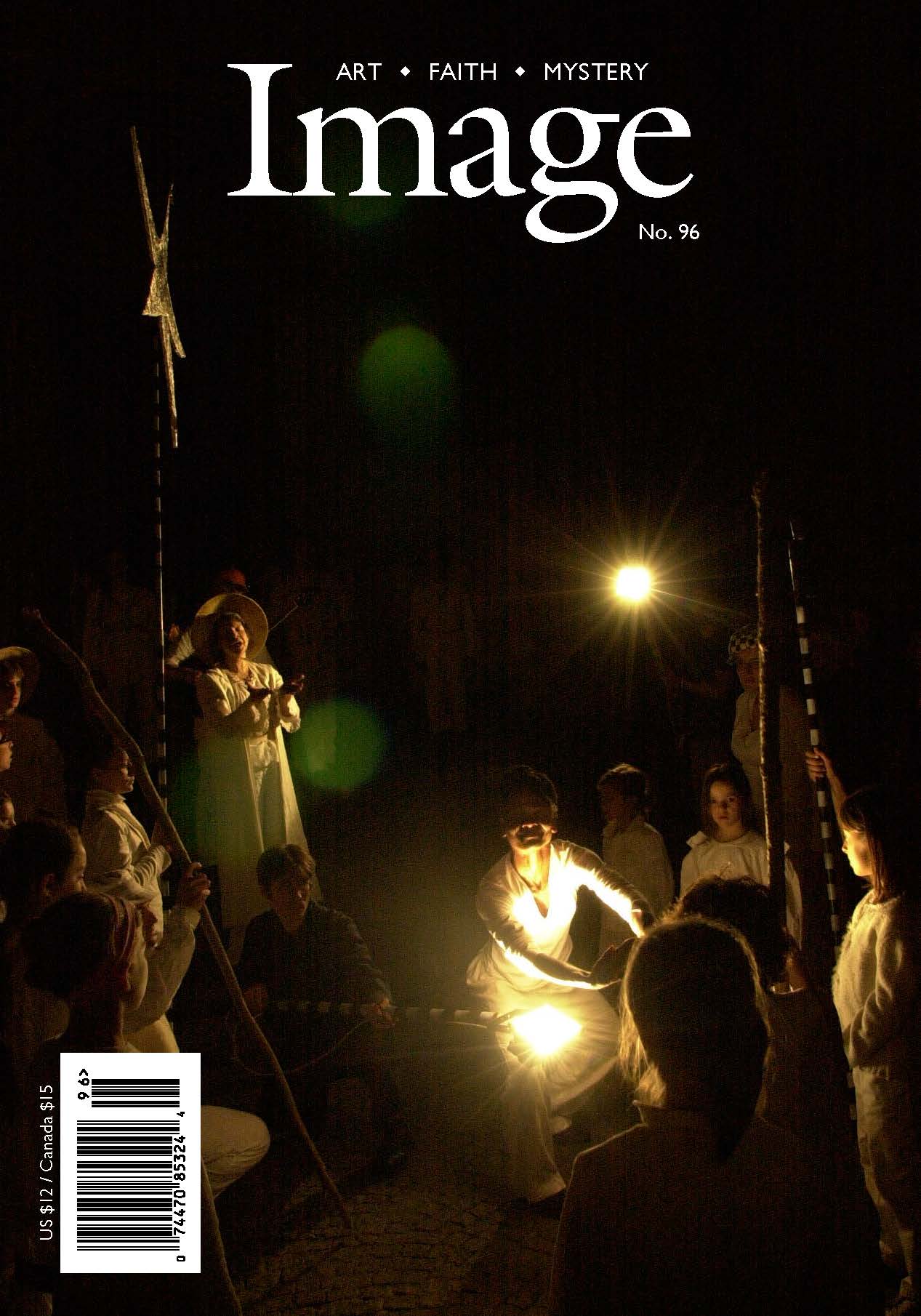 Image Issue 96 features a profile of theater director Karin Coonrod. On the cover is the nativity scene from her staging of a medieval mystery play in the streets of Orvieto, Italy. John Skillen, who wrote the profile, also interviewed her for our website on her latest production, Babette’s Feast, now running in the New York. In nine short essays, poets including Alicia Ostriker, Lorna Goodison, Ed Hirsch, and Zeina Hashem Beck reflect on favorite hymns and spiritual songs. And five pastors, liturgists, and scholars reflect on the place of song and poetry in liturgy. Edward Dougherty interviews poet Margaret Gibson on Zen, loss, the via negativa, and life in the woods. John Kohan discovers the new iconographers of Ukraine, whose work reflects the complicated history of their home. Fiction by Gershon Ben-Avraham offers a surprising vision of the peaceable kingdom. With poems by Graham Hillard, Ashley Wong, Margaret Gibson, Cortney Lamar Charleston, Scott Cairns, Luci Shaw, Allison Seay, and others.

Paula Bohince, Vespers, Gordes
Blue Fig
The Egg of Anything

Cortney Lamar Charleston, Your Face Has Always Been...
Psalm for P.

Betsy Sholl, House of Sparrows
Knock
Thinking of Jonah at the Children's Museum

John A. Kohan, On the Border of East and West: Searching for Icons in Lviv

Edward A. Dougherty, A Conversation with Margaret Gibson

Repeatable Surprise: Poets on Their Favorite Hymns and Spiritual Songs

Jacqueline Osherow, Three Verses from Hallel: Out of the Narrow Place

Scott Cairns, Be Thou My Vision: Witness to the Revelation

Sydney Lea, Take My Hand Precious Lord: A Short Treatise on Slowing Down

The Impossible Song: Poetry and the Longing for Perfect Praise

Timothy P. O'Malley, This is the Night

Gershon Ben-Avraham earned an MA in philosophy (aesthetics) from Temple University, where he studied with the American philosopher of art Monroe Beardsley. He and his wife live in Be’er Sheva, Israel. His fiction and poetry frequently focus on faith frictions.

Paula Bohince is the author of three poetry collections, most recently Swallows and Waves (Sarabande). She has been the Amy Lowell Poetry Traveling Scholar and a fellow of the NEA. She lives in Pennsylvania.

Scott Cairns is Curators’ Distinguished Professor of English at University of Missouri and serves as director of the Seattle Pacific University low-residency MFA program in creative writing. His nine poetry collections include Slow Pilgrim and the forthcoming Anaphora (both from Paraclete).

Cortney Lamar Charleston is a 2017 Ruth Lilly and Dorothy Sargent Rosenberg fellow and author of Telepathologies (Saturnalia). His poems have appeared in Poetry, New England Review, AGNI, and elsewhere.

Edward A. Dougherty, a former Brethren Volunteer Service worker at a peace center in Hiroshima, is a professor of English at Corning Community College. His latest poetry collections are Grace Street (Cayuga Lake) and Everyday Objects (Plain View).

James Harpur’s latest poetry book is The White Silhouette (Carcanet). He studied classics and English at Cambridge University and has written books on pilgrimage and Christian mysticism. He gives talks on poetry, art, and the imagination at universities and schools and is poetry editor of the Temenos Academy Review.

Graham Hillard has contributed to previous issues of Image and to numerous other journals. He is a recent recipient of an individual artist fellowship from the Tennessee Arts Commission and the editor of the Cumberland River Review.

Jean Janzen is the author of seven books of poems and two books of essays, most recently What the Body Knows (Cascadia). She has received an NEA grant for poetry and has taught at Eastern Mennonite University and Fresno Pacific University.

John A. Kohan worked at Time magazine for twenty-two years and was bureau chief in Moscow from 1988 to 1996. He owns the Sacred Art Pilgrim Collection of contemporary religious art and organizes church exhibitions from his holdings, most recently East Meets West: Women Icon-Makers of Ukraine. www.sacredartpilgrim.com

Allison Seay is the author of a book of poems, To See the Queen (Persea), and associate for religion and the arts at Saint Stephen’s Episcopal Church in Richmond, Virginia.

Luci Shaw has been writer-in-residence at Regent College since 1986 and has published over thirty-five books of poetry and creative nonfiction. In 2013, she received Image’s annual Denise Levertov Award. A new poetry collection, Eye of the Beholder, is forthcoming from Paraclete.

John Skillen earned his PhD in medieval and Renaissance studies from Duke University. He founded Gordon College’s arts-oriented semester program in Orvieto, Italy, and now directs the Orvieto-based Studio for Art, Faith & History. His recent book is Putting Art (Back) in Its Place (Hendrickson).

Yerra Sugarman is the author of two poetry collections: Forms of Gone and The Bag of Broken Glass (both from Sheep Meadow). She holds a PhD in literature and creative writing from the University of Houston.

Ashley Wong grew up in New Hampshire. Her poetry has appeared or is forthcoming in Prairie Schooner, Crab Orchard Review, Salamander, and Fugue. She received an MFA from Boston University where she was a Robert Pinsky Global Fellow to Timor-Leste.

Read our interview with Karin Coonrod, only available online!