IT’S THE DAZZLE OF ILLUMINATION that catches your eye from the other end of the vaulted hall in the Cloisters. Your attention now fixed, you walk the length of the cool stone floor and draw near. At over seven feet tall, the panel towers above you, and your eye is absorbed by its golden upper half. It almost emits a glow.

What looked like a regal knight proves to be an angel. Here is Saint Michael by the Spanish Master of Belmonte, from the late 1400s. Up close, there is a sculptural quality to the work, like a medieval Rauschenberg. The joints of his armor, the hilt of his sword, the chain mail that protects him are all carefully crafted metalworks that protrude from the surface and beckon touch.

There is an undeniable, sumptuous beauty to the piece: Michael’s triumph is set in a courtly scene with intricate tile flooring, gold-leaf draperies, and wall coverings that could have inspired William Morris. His armor looks like it’s destined for the Met Gala; his golden torso is wrapped in a red velvet robe; his angel wings bear peacock feathers. The light and patterns delight you on that register where you receive all kinds of beauty: the light that speckles the forest floor like daytime fireflies; the crescendo of an Aretha Franklin song; the enchantment of Klimt’s Kiss.

But then you see it: the monster Michael is treading upon, like an echo of the promise made to Eve in the garden. Hideous green and brown and a burnt orange that speaks of fire, its eyes are yellow and sickly. Its hide is variously fur, scales, and skin. A creature without an essence, it doesn’t know what to be.

As you inch closer, you notice pairs of eyes all over it, and then you notice each is accompanied by a mouth. The creature’s limbs and torso are all devouring faces. Like evil itself, this predator is a parasite: the beast is eating itself alive. But Michael’s javelin has pierced its lower jaw. The battle is almost over, but the beast still flails and resists.

The work whose allure was beauty now includes its opposite: the repellant, the monstrous. Yet it is no less captivating for that. Indeed, the image lodges itself in your imagination and you can’t shake it. And for a brief moment, you wonder if such a monster lives in you.

I’m tired of beauty. Or rather, I’m tired of hearing the word “beauty” overused and misapplied. When we become lexically lazy, we trot it out as if it’s the only way to justify art, a magical incantation to hallow our making. It becomes a buzzword of aesthetic piety, haloed with the hush of “meaning.” It’s a favorite word of religious folk who want us to care about art.

We need more than a one-word dictionary to affirm and praise art. Art is not just about showcasing beauty. Art is the cultivation of myriad artifacts that speak to the imagination for myriad reasons. Not all faith-infused art aspires to beauty. Beauty might be the pinnacle of a neat and tidy metaphysics, but it seems less at home in the minefields of human experience narrated in our sacred scriptures. In his latest book on theology and the arts, A Peculiar Orthodoxy, Jeremy Begbie admits his own worries about centering beauty in our account of art: “I believe that the concept of beauty needs very careful handling,” he says, “if we are not to distort the way the arts actually operate in practice, and if we are to avoid being captive to intellectual schemes that cannot accommodate a narrative that culminates in a crucifixion and resurrection.”

This protest against the hegemony of beauty is something I learned from one of my teachers, Calvin Seerveld. Across a lifetime of labor as a scholar, critic, and champion of the arts—as well as a hymn writer and translator of the Bible’s poetry—Seerveld persistently challenged the reduction of the aesthetic to the beautiful. There’s almost something inhumane about such a narrowing, he argues, because it discounts so much human imaginative endeavor.

Instead, Seerveld argues that at the heart of all our artistic endeavors is something more fundamental: “allusiveness” he sometimes calls it, or “nuancefulness”—a kind of subtlety and obliqueness and indirectness that somehow speaks to us all the more because it doesn’t confront us head-on but slinks into our being by other avenues. At the bottom of the aesthetic is, fundamentally, a capacity for play. That’s not to say art amounts to fun and games. Sometimes play can be deadly serious, sometimes whimsical. Sometimes the filmmaker plays with light to open portals to another world; sometimes a cartoonist plays with lines to show us the insanity of our politics. This play of allusivity that is art can be marshalled to many ends, of which beauty is only one.

I still like Seerveld’s example from his 1974 book, Rainbows for a Fallen World: “the decisive feature that turns photographic duplication of a face into art isallusiveness. When the reproduced lines, shadows, and lighting subtly nudge into visibility character flaws or subterranean strengths of the person, for example, and portray by a quality of disciplined suggestiveness fine matters in the face that are simply neglected in photographic reproductions which merely depict so-and-so, then the result is photographic portraiture.”

Consider the difference between your passport photo and portraits by, say, Ohio photographer Michael Wilson. Your passport photo is governed by uniform rules of position and lighting. Every head is made to fit a frame. Smiles are verboten. So is nuance. There is nothing artistic about it, even if you look beautiful.

In contrast, Wilson’s portraits are revelations of people you don’t even know. While Wilson has made his name photographing singers and musical artists, from 2016 to 2018 he undertook a very different project. With a mobile studio (homemade frames holding heavy black cloth), Wilson camped out front of various branches of the Public Library of Cincinnati and invited passersby to sit for portraits. In a notebook from this project, he wrote: “This act of making pictures of people is starting to remind me of begging for alms.”

So Wilson is the mendicant artist, asking not so much for subjects as collaborators—donors, you might say, people willing to give of their time, sure, but also willing to give up something of themselves to the camera, to this encounter. To become vulnerable. To trust Michael. “I’m hoping there will be some pictures that echo that exceptional moment of vulnerability and openness with a stranger.”

The catalogue of resulting portraits, They Knew Not My Name and I Knew Not Their Faces, takes its title from a gospel song written by Albert E. Brumley and recorded by the likes of Bob Dylan, Ralph Stanley, and others:

Wilson’s portraits diminish stranger-ness without diminishing otherness. The faces we meet are at once immediate and elusive, but their very elusiveness and reticence is their dignity and humanity. We sense that each is more than we see; each contains multitudes. “Beauty” is not the only way to celebrate these epiphanies.

The narrator of the Brumley song is returning to his hometown after many years, and everyone is a stranger because all those he knew have passed on. “Some beautiful day I’ll meet ’em in heaven,” he sings, “where no one will be a stranger to me.” In that sense, Wilson’s portraits are a foretaste of what is to come.

Maybe art’s job isn’t to save the world. Maybe art shows us the world, brings us face to face with what we otherwise ignore and paint over with lying niceties. Sometimes it’s the beauty we’ve missed. But there’s so much more than beauty in this world.

James K.A. Smith is editor in chief of Image. 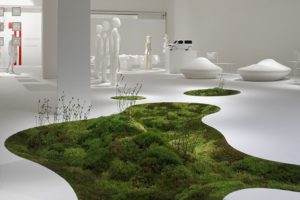 The Gift of Not Knowing